2015 A Pony for Christmas- Event Repaint

This Colorway (or repaint) Hallmark Keepsake Ornament was exclusively available at the 2015 Destination Keepsakes Hallmark National event to attendees of the Hallmark Local Club Dinner. Since this was an exclusive Hallmark Ornament for the event is was limited production in small quantities which makes this a very difficult ornament to find. The ornament is a repaint of the 2015 A Pony for Christmas #18 ornament.

The 20th Hallmark Ornament in this series was released in 2017. The white pony with its teddy bear jockey are jumping over a red brick jumping wall. 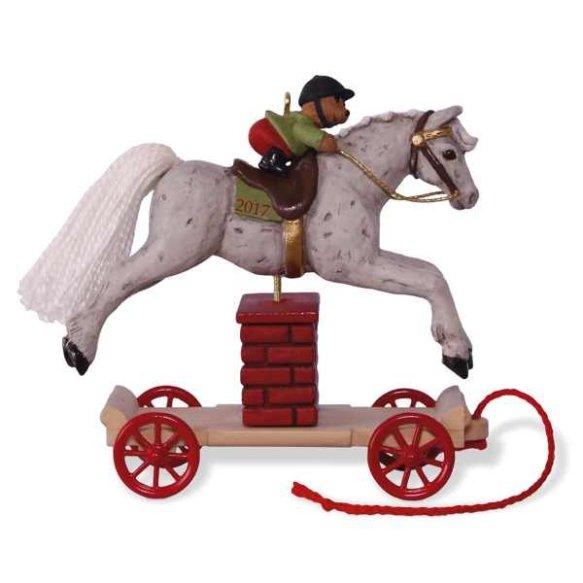 This pony likes galloping out on the range with his favorite teddy bear pal. But when visions of sugar cubes dance in his head, he trots home to the Christmas Corral! Eighth in the series, this Hallmark Keepsake Ornament was released in 2005.

We are ll getting so excited for the big day to be here! We all act like little kids anticipating Christmas. I have some wrapping to still get done and I would like to try and make some more cookies and candy. I do not know if I will have time to do the cookies and candy with all the work we have to do at The Ornament Factory.

That is all for now!