This Hallmark Ornament Series featured different churches that would would glow softly through their stained glass windows when connected to a miniature Christmas light string. The Candlelight Services Hallmark Keepsake Ornament Series began in 1998 with The Stone Church, and ended in 2009 with The Old Brick Church. In 2017 Hallmark Ornaments came out with another ornaments named Candlelight Services that is a nice addition to the series. Each of the churches in this series represents a style of architecture from a different time period, location, or tradition.

A unique ornament that symbolizes the joyful celebrations held in churches across the land, when families gather with their friends and neighbors on Christmas Eve. Glowing with light, the churches in this series suggest heartwarming scenes filled with music and pageantry of the season. The Colonial Church was first available in 2004.  Plug ornament into any light bulb socket on a standard miniature tree light string for optional lighting effect. 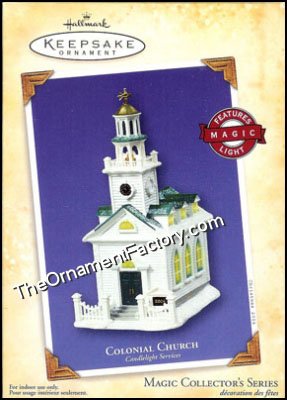 Countryside Church was first available in 2008 and was modeled after late-Victorian or Gothic Revival churches, the steeples of white clapboard buildings like this one are visible across the Midwestern countryside as reminders of hard work and good faith. These churches, with their creaking floorboards, weathered roofs, and stained glass, are the homes of more modern congregations today. But their Christmas services are times of old-fashioned togetherness, warmth, and rejoicing echoes of the pioneering faithful who built them over a century ago. Attach to miniature light string for optional lighting effect. 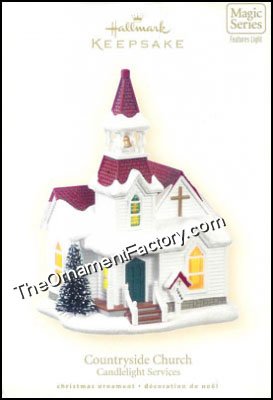 Since colonial days, New England families and their neighbors have been gathering to celebrate Christmas in white, wood frame churches. This 1999 Hallmark Keepsake Ornament was inspired by designs from the 1800’s that include an open bell tower, clock, and weather vane. Light glows steadily and softly from within the ornament, illuminating the windows and reflecting the beauty and hope of the Christmas season. 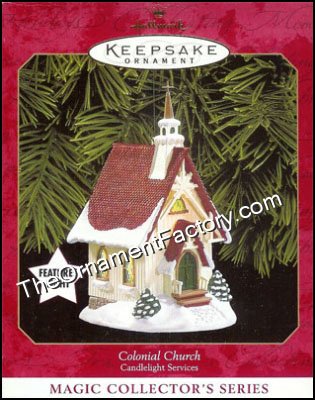 Adobe Church is a unique ornament that demonstrates the ability of people of faith to adapt church architecture to the materials at hand. In the great Southwest and southern California, mission-style structures crafted of adobe brick serve as houses of worship. Light glows softly and continuously from the windows of this charming ornament, adding a bit of Magic to the Christmas season. Plug ornament into any light bulb socket on a standard miniature tree light system.

The Candlelight Service series is so beautiful with all of the different churches. You can see these and find other great ornaments for you and your family from The Ornament Factory.

It has been lots of fun here at The Ornament Factory. There is so much to do and we have so much fun doing it. There was a box making contest the other day, that was fun! I am thinking the elves and I are going to have a movie night in then near future. What are some suggestions you have for us?

Have a happy day!