In 1997, Hallmark Ornaments released Waitin’ on Santa has Winnie the Pooh and Piglet sitting in a big green stuffed chair trying to stay awake to get a peak at Santa in this Hallmark Keepsake Ornament. Pooh and Piglet were not able to see Santa because they fell asleep but they left cookies and milk as a treat for Santa.

Tree Trimmin Time was released in 1988. This one is special because it is one of the Hallmark Miniatures. In this three piece Hallmark Ornament miniature set, Pooh, Tigger, and Piglet are busy decorating their Christmas tree. Pooh is getting ready to put the star on top of the tree, while Piglet decorates the tree and Pigger is bouncing in with gifts.

Rumbly in My Tumbly….

Rumbly in My Tumbly, has the silly old bear, Winnie the Pooh, stuck in the hole in the tree but he does not mind because there is honey.

Poor Eeyore, he seems to have lost his tail. Pooh is trying to find his “new tail.” New Tail for Eeyore was released in 2011 in the Winnie the Pooh Collection. 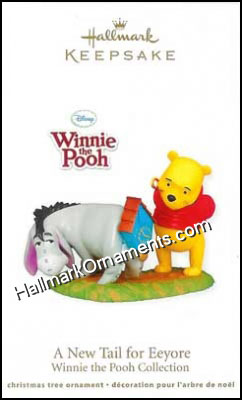 Oh, how I love Winnie the Pooh and his friends. You can see these and many more Disney Hallmark Ornaments at The Ornament Factory. http://www.hallmarkornaments.com

It is Tuesday and you know what that means for us elves…..Taco Tuesday!!! We love Taco Tuesday! I hope you all have a great rest of your day!