Growing up my dad would always watch Star Trek, so I watched it with him. I would imagine myself being on Star Trek and riding in the different ships and using the cool machines they had. Here are some of my favorites but you can look and find your favorites here.

The crown jewel of most Hallmark ornament collections, as well as many Star Trek collections, the 1991 Starship Enterprise is one of the most sought after Hallmark Keepsake ornaments ever produced. Modeled after the U.S.S. Enterprise from the 1960s hit television show, Star Trek, this Hallmark Keepsake Ornament features red and green flashing lights and a bridge light that glows. The timing of the release of this ornament helped to commemorate the twenty fifth anniversary of the original Star Trek television series. When this famous starship was released by Hallmark in 1991, it was the hit of the season, and impossible to locate by most avid Star Trek fans as Hallmark stores across the country sold out almost instantly, making it a highly sought after ornament by Hallmark ornament and Star Trek collectors alike. 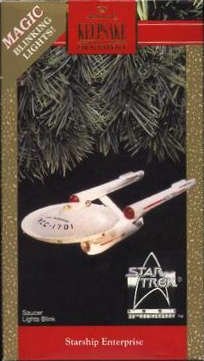 The follow up to the 1991 Starship Enterpirse ornament, the Shuttlecraft Galileo Hallmark ornament was released in 1992, and was also a huge hit with Star Trek collectors. Not only did the cockpit of the NCC-1701/7 light up, but it also features a special holiday message from the First Officer of the USS Enterprise, Mr. Spock. To hear Spock’s message, “Shuttlecraft to Enterprise, Shuttlecraft to Enterprise. Spock here. Happy Holidays. Live long, and prosper,” press the button on the bottom of the shuttlecraft.

In Star Trek when they go on missions that always take their Starfleet Tricorder with them. Press the button on the ornament to see the screen illuminate and hear dialogue from from the original “STAR TREK” television series! 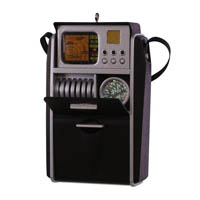 My dad has a tree dedicated all of his Star Trek and Star Wars Hallmark Keepsake Ornaments. It is such a cool tree! He has all of these ornaments on it and more. He just added the 2018 Hallmark Ornaments to it. He is going to need a new tree soon with all of those ornaments.

Thankfully it is Friday!!! I am so excited for the weekend! We many fun activities to do for the holiday season. Do not get me wrong, we will still be working to make sure we get all of your orders out. We love our job! I hope you all have a great Friday!