If you are a Trekkie, or you have someone on your Christmas list who is, now is an excellent time to add to your collection. The Star Trek Hallmark ornaments collection began in 1991 and has been going strong ever since. The first Star Trek ornament was the 1991 Starship Enterprise Hallmark Ornament. In 2010, due to the popularity of the Star Trek line, Hallmark started the Star Trek Legends series, which began with Captain James T. Kirk as the headliner first in the series.

Those Trekkie fans who can’t get enough have been waiting with baited breath to find out what the new releases for 2018 will be. The word is finally out. The 2018 collection will add six more ornaments to the mix. This year, Hallmark has even added one from the Star Trek animated series.

In July of this year, Hallmark released the scene from “The Naked Time.” This fun ornament depicts a shirtless Sulu fencing Captain Kirk atop the Enterprise bridge. The ornament is a “magic” one and plays the dialogue from the movie, making it even more spectacular. Also, in July, the Starfleet tricorder was revealed from the Original Series. It too is a magic ornament that lights up and plays the original Trek dialogue. The third release in July was the Crossfield-class DSS Discovery, announced and anticipated since September 2017. Lastly, the Constitution-class USS Enterprise was a throwback from the original Hallmark ornament first released in 1991. It is the seventh TOS-Era Enterprise Hallmark ornament. 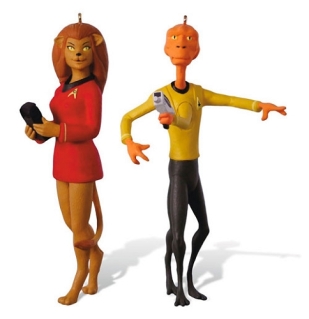 Over the years, Hallmark wanted to make something super special for Star Trek, and decided to reserve a few of the Star Trek Hallmark ornaments as convention-only exclusives. For 2018, the ornament will feature the 45th-anniversary commemoration of Star Trek: The Animated Series. It is a two-pack ornament set that contains the alien crew member favorites from the show. Lt. Arex and Lt. M’Ress, the three-armed navigator, are the very first Star Trek Hallmark ornaments fashioned after the Animated Series.

Since the Animated Series ornament set will only be available as convention exclusives and not in Hallmark stores, it will make them some of the rarest and most valuable items in your Star Trek ornament collection for years to come. If you can get your hands on one, you will have a very select piece.

Get Your Star Trek Hallmark Ornaments

I love the Star Trek tree my grandpa has. It has blue lights and many of the Star Trek Hallmark Ornaments on it. I hope he puts it up soon!

Back to work  here at The Ornament Factory. Lots of orders to pull and package for shipping. Thank you to all of you who have been placing orders. We appreciate all of our wonderful customers!